THE HISTORY OF SARRATT VILLAGE

Sarratt is surrounded by open fields and bordered to the south by the River Chess and the Chess valley – designated by the UK government as an ‘Area of Outstanding Natural Beauty’. 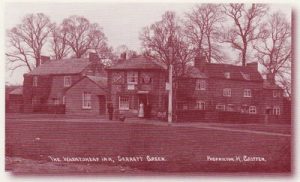 Possibly the beginning of the Wheatsheaf – photo circa 1912

There was no Wheatsheaf pub, only pairs of cottages one of which housed a shop.

Then nothing else until one reached Sarratt Hall and two cottages (one of which included another shop, the blacksmith’s shop) and an Infant School (run at Sarratt Hall by Mary Ann Day).

On the left hand side of The Green, walking from The Dell and The Cricketers, one would pass a block of eight cottages (of which one survived as Ivy Cottage until being totally rebuilt a few years ago).

Then there was nothing again until one reached what is now the entrance to Alexandra Road after which one would pass seven cottages, mainly in pairs.

Along the Chess valley were a number of villas and farms in Romans times, one quite close to where Sarratt is today, though the village did not exist then.

Holy Cross Church is believed by some to stand on the site of a Roman burial ground and a Roman road, from Verulamium to Silchester, passed through what is now Sarratt.

There are also a number of strip lynchets which run along the side of the Chess valley below the church which might be Roman in origin. 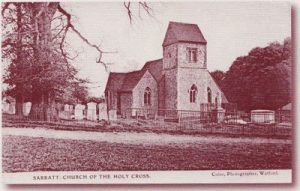 A hill-village, built on a ridge surrounded by forest, Sarratt dates from about AD 700, one legend being that the original settlers were a family from Sweden. The name might have originated with the Scandinavian ‘swyra’ meaning neck, col, or a prominent short ridge, evolving in Saxon times into ‘Syre’, an Old English word. Another explanation by the late Margaret Gelling, a leading expert in the origin of English place names, is that it comes from ‘syreth’ – a dry place.

In 796 the manor of Syre, along with others in the south and west of the country, was given by King Offa to the abbot of St. Albans Monastery. The earliest known record of Syreth is 1077. Other variants evolved and for several centuries the name had three strands: Syreth (later Siret): Sareth (later Saret): and Sereth (later Seret), until Saret, Sarrett and, eventually, Sarratt prevailed.

Shortly before the Norman Conquest clearance of the monastery’s land was begun by Abbot Leofstan, although it was not until the 13th century that the greater part of the arable land was properly enclosed and cultivated.

Until the 18th century Sarratt was a hamlet, a cluster of properties surrounding the church about three-quarters of a mile from the hamlet of Sarratt Green. The latter began to expand during the 17th century and eventually the name of Sarratt was applied to the whole, by which time very little of the development around the church had survived.

The population of Sarratt Parish in 1831 was about 450, rising to 654 in 1871. Today it is about 2,600, which includes the hamlets of Belsize, Chandlers Cross, Commonwood and parts of Bucks Hill. 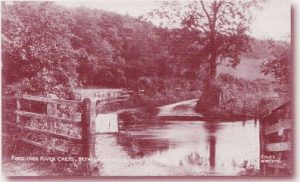 The River Chess is reflected in Chesham’s traditional pronunciation of ‘Chess-um’.

The Chess, along with the Colne and Gade, gives rise to the name of the district of Three Rivers, in which it forms its confluence with the Colne.

An insight into the village of Sarratt in 1842 – the date of the Sarratt Tithe Map. The following article, slightly adapted, was clearly written by somebody who had studied the buildings and fields as shown in the Tithe Map and its accompanying index. Unfortunately, the article is unsigned but we are indebted to the author for this imaginative piece of writing.

Any inhabitant of twenty-first century Sarratt who was able to take a journey back in time to 1842 (the date of the Tithe Map) would doubtless be most conscious of the emptiness of the village.

Only in the north-west (where Bragmans, Newhouse, Rosehall and Whitedell were all flourishing farms) can the landscape have been substantially the same as today. In the south-east the main course of the River Chess still took its way beside the drive to Sarratt Mill House and flowed under the old mill buildings themselves. (Surprisingly, the author makes no reference to the eight cottages and a house further along the river at Sarratt Bottom). In the corner of the churchyard nearest to the almshouses stood a cottage, soon to disappear.

Walking northwards from the church up Church Lane we shall not pass any sign of habitation (apart from The Cock and the lane leading to the Rectory – or Vicarage as it was then known) until we come to The Green: and if we carry on round the corner to the right we should find nothing in Dimmocks Lane after two pairs of cottages (Rose cottage occupies the site of one pair, the other pair is now Garage Cottage), and nothing in Deadmans Ash Lane apart from four cottages on the left just before the road drops down the hill.

Green End Farmhouse was there, although we might not recognise it at first because large barns hid the house from the road. On the spot where now stands The Cricketers there was a block of four cottages and a Meeting House. There was nothing else around The Dell.

Moving left onto the main part of The Green we should be struck firstly by the fact that there was only the current ‘main’ road over The Green; the present road in front of the shop did not appear until later in the century.

Along the road on the right one would pass a series of farms – Great Wheelers Farm, Pear Tree Cottage (then worked as a cottage farm), the Boot, another farm which survives as Sarratt House and then Red Lion Corner, much as it is today but with pub and farm functioning as such. 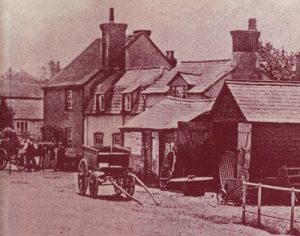 Possibly the beginning of the Wheatsheaf – photo circa 1912

There was no Wheatsheaf pub, only pairs of cottages one of which housed a shop.

Then nothing else until one reached Sarratt Hall and two cottages (one of which included another shop, the blacksmith’s shop) and an Infant School (run at Sarratt Hall by Mary Ann Day).

On the left hand side of The Green, walking from The Dell and The Cricketers, one would pass a block of eight cottages (of which one survived as Ivy Cottage until being totally rebuilt a few years ago).

Then there was nothing again until one reached what is now the entrance to Alexandra Road after which one would pass seven cottages, mainly in pairs.

There was nothing in Dawes Lane apart from a pair of cottages on the left and a now disappeared block of five at the ‘Fold’ (on the corner of Dawes Common).

Passing Dawes Lane and a single cottage we come to a beer house, a house on the site of The Laurels, and a block of three cottages where there is now The Woodyard, followed by Holly Tree Cottage and Holly Tree Farm.

Poleshill was without a single house, as was the Sarratt side of Belsize (there were buildings on the other side of the road but they were not within the ecclesiastical parish of Sarratt so were not shown).

Woodmans was certainly there to the left of Chipperfield Road and the beginning of Ollieberrie Farm was there in a pair of cottages, rejoicing in the name of Bacon Sops – but of the buildings which at present flank Holly Hedges Lane there was no sign.

Not surprisingly, of the twenty houses (as opposed to cottages) the majority were farm houses, in fact if not in name. Only Sarratt Mill, Goldingtons, Sarratt Hall, Little Sarratt Hall, Great Sarratt Hall and one of the pair of semi-detached houses on The Green were residences pure and simple. 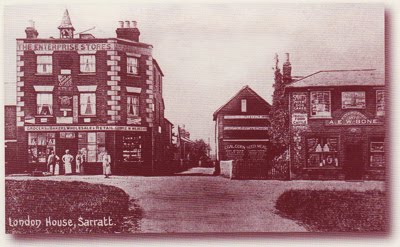 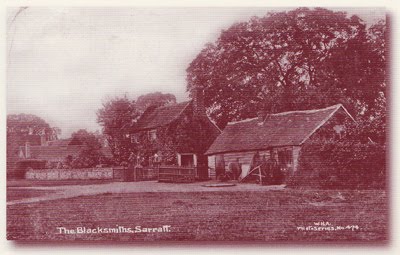 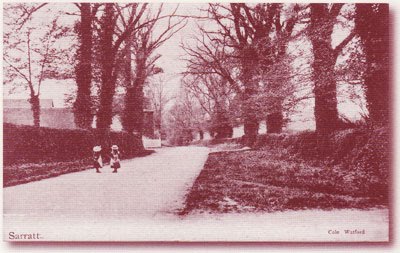 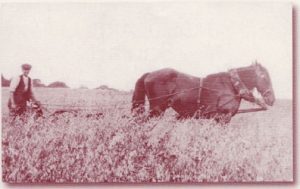 Major Farms were Green End Farm (although it did not at that time bear this name), Sarratt Hall Farm and Rosehall Farm, each of these covering more than two hundred acres.

These, together with Bragmans Farm and New House Farm (each nearly one hundred acres), between them farmed the bulk of the arable fields in the parish. But there were ten smaller farms varying from thirty-five to five acres, and four cottages working from one or two small fields apiece.

Of the present pubs two were active – The Cock and The Boot – together with The Red Lion and a beer house on The Green near the corner of Dawes Lane. There were two shops – both at the north end of The Green (at least one of these was a workshop). Finally to round off the statistics, there were eighty-seven cottages, eleven of which had either fields and/or an orchard attached.

NOTE: The Tithe Map was printed in 1842 but the original survey was carried out in 1840.
Mission Hall Meeting 1921

Our thanks to Veronica Martin for supplying these minutes – George and Martha Wilbee were her husband’s Great Great Grandparents.